Getting Rid Of Old Monitors & TVs

I have an old tube style computer monitor that still works. What’s the best way to get rid of it?

This question was answered on April 20, 2016. Much of the information contained herein may have changed since posting. 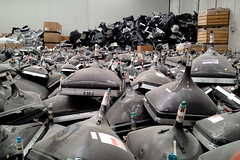 Nothing symbolizes the unintended consequences of our appetite for technology like the growing problem of older CRT (Cathode Ray Tube) displays.

Sleek flat panel televisions and computer monitors made CRTs all but obsolete starting back in 2010 and now we’re dealing with the toxic aftermath on a global basis.

Nearly 1 billion CRTs were sold between 1980 and 2010 according to EPA estimates and many of them are still collecting dust all over this country.

When CRT displays were in favor, recycling older units was cost effective because the materials could be used to make newer displays, but we’ve all moved on so there’s little use for the raw materials.

I’m only aware of one recycling facility left in the world that uses old CRTs to create new ones and it’s in India.

One of the biggest challenges in recycling CRTs is the large quantity of lead they contain; a computer display can average 4 pounds of lead while larger televisions can have twice that amount.

Lead from CRTs that get released into the environment is very harmful to humans, so it’s critical that we keep this very toxic material out of our landfills.

Unfortunately, most electronic recyclers have stopped accepting CRTs because of the high costs associated with handling this unwanted material.

If it’s still working, I’d start by finding a way to repurpose rather than recycling the display.

Check with organizations such as Habitat for Humanity’s ReStore (http://www.habitat.org/restores) or Goodwill (http://goo.gl/QqdzIv) to see if their resale programs can make use of it.

For non-working displays, you’ll have to do some leg work to find an organization that is willing to take it in and you’ll most likely have to pay a small fee (@$5) to help cover the cost of recycling it.

Check with your municipalities recycling programs to see if they have special days or facilities that will accept CRTs and if they charge for it.

You can also use online resources such as Earth911 (http://search.earth911.com) to find recycling options based on the specific type of electronics you’re trying to get rid of.

Million of tons of toxic electronic-waste of all types is slowly making its way out of our closets, desk drawers and basements, but far too much of it will not be recycled properly.

Most estimates are that only about 15% of all electronic waste is being disposed of responsibly; the rest is likely ending up in our landfills.

The long-term impact of all these toxins from CRTs, smartphones, computers, printers and the like in our landfills is pretty unpleasant, so we all need to be more conscientious about what we throw away.

In general, if it plugs in or uses rechargeable batteries, it most likely contains hazardous materials and should not be thrown in the trash.

For items other than CRTs, Data Doctors locations in Arizona (https://www.datadoctors.com/mkt/AZ) have a year round program for recycling your old electronics at no cost.

By allowing electronic items to be dropped off any time of year, we’re hoping to encourage responsible disposal of all electronics on an ongoing basis.