I heard that there’s a class action lawsuit against Seagate for faulty hard drives. How do I check my computer to see what kind of hard drive I have?

This question was answered on February 3, 2016. Much of the information contained herein may have changed since posting. 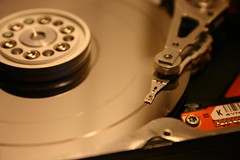 In my 25+ years of working with failed hard drives, I’ve seen this story play out many times with many different hard drive manufacturers.

The way I look at it, there are only two kinds of hard drives; those that have failed and those that are going to fail…plan accordingly.

Traditional magnetic hard drives are mechanical devices that can’t escape the laws of physics, which is represented by the ‘bathtub curve’ of failure rates.

The bathtub curve refers to the higher likelihood that a drive will fail in the early or late stages of its use, with an overall lower rate of failure in the middle.

In general, factory defects increase early failures while at the 3 year mark, there’s a measurable increase in hard drive failures from wear and tear.

The reason Seagate is the current target is because a specific drive that was very popular is deviating from this classic pattern.

A class-action lawsuit was recently filed on behalf of purchasers of the following Seagate hard drives that have been available since 2011:

The action was brought on in part by the reported decision by BackBlaze, an online backup company, to stop using Seagate’s ST3000DM001 last year because of unacceptably high failure rates.

The published data showed that BackBlaze experienced a 32% failure rate with this one specific hard drive, while other drives they were using ranged from 4% to 8% failure rates (including a different 3TB drive from Seagate).

The BackBlaze data was not collected in a scientifically controlled manner, so there are lots of potential explanations that may come out over time, but on its face, it should be a reason for concern if all your precious data is being stored on one of these devices.

Windows users can use the ‘MSinfo32’ utility to determine what kind of hard drive their computer is using.  Look under the Components section for Storage, then Disks to see if the Model section shows the ST3000DM001.

Mac users can use the ‘System Information’ or ‘System Profiler’ utility to find the info under the ‘Storage’ section.

If you do have one of these drives in your computer or as a backup drive, you can submit your information to the law firm here: https://goo.gl/fklhS7

As this is in the very early stages, don’t expect anything to happen quickly as these things can drag on for a long time.

A more important thing to focus on is making sure you have a solid automated backup in place, meaning you have at least 2 copies of your data (preferably 3) on two different storage devices.

We sign all of our members up on Carbonite unlimited online backup accounts because we’ve found it to be the best solution for most users.  A free trial is available at http://goo.gl/wKaqLP