The Internet speed test say I have a fast connection, but why does everything still seem so slow?

This question was answered on April 11, 2019. Much of the information contained herein may have changed since posting. 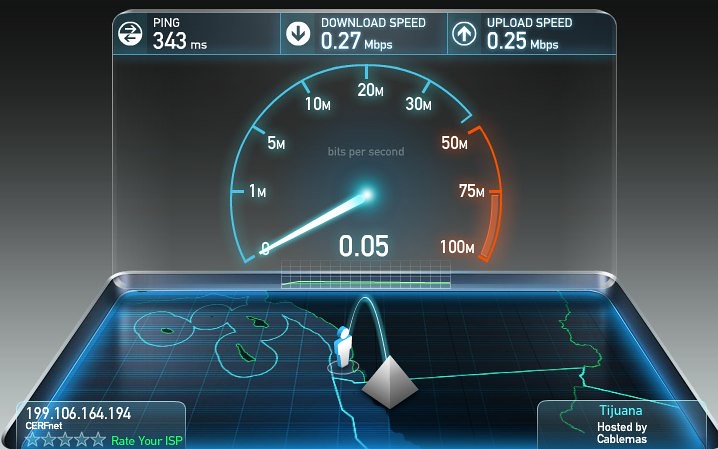 There are few things these days as frustrating as a slow Internet connection, especially when you’re paying for a ‘fast connection’.

“Up To” Speeds
Your ISP can’t control your overall Internet experience because your speed is only going to be as fast as the slowest segment between you and the site you’re trying to visit.

Think of your rated Internet speed the same way you think of a speed limit sign.  Even though the freeway sign says you can go 75mph, you’ve got no shot of going that fast during rush hour because of the congestion on the freeway.

Your ISP will tell you that you get speeds ‘up to XX’ because that represents the best-case scenario and not necessarily your average.

ISP Hosted Tests
Many of the most popular testing sites encourage ISPs to host a server on their network to help increase the chances that their users will get the fastest test results.

The problem with this approach is that unless you only use websites hosted by the company that connects you to the Internet or their peering networks, it doesn’t represent the real world.

So my first suggestions is to be suspicious of any speed-testing website or app your ISP suggests you use.

Understanding the Variables
There are so many variables that can impact your actual experience that have nothing to do with the connection that your ISP is providing you.

The time of day, the website you’re trying to connect to, whether you’re using Wi-Fi or have a wired connection, the age of your modem, an old cable or how many people on your on network are currently using the same connection just to name a few.

The other thing to remember is that when you run any of these tests, you’re taking a snapshot of that moment in time, which can be extremely misleading.

You really need to run a series of tests at different times of the day over several days to truly determine your average speeds.

Single-Thread vs. Multi-Thread Testing
There are a couple different ways to test your connection that both represent real-world situations.

Most testing sites only offer to provide the faster ‘multi-thread’ test, which means it’s measuring your speeds across multiple connections, which represents a typical experience when visiting many websites.

A single-thread approach tests your speeds with a single connection, much like when you’re downloading a file or an app from the web.

When everything on your network is running optimally, both of these tests should come back with similar speeds.  When they don’t, it can be an indication of a problem either within your own network or with your ISP.

Independent Testing Site
One test site that I know has no affiliation to any of the ISPs and also allows both single and multi-threaded testing is https://testmy.net. Their test results are more reflective of your actual speeds and far more detailed. They also offer an Automatic Speed Test that will repeatedly test your connection over a period of time and log the results.

Your results will be compared to others from the same host as well as in your city and they have suggestions to help you improve your Internet speeds (http://bit.ly/2VzYiXI).